Hello, my pretties... yes, it's me. I'm working on the blog again. Just sort of sprucing things up a bit. I tired of the old wall paper and decide for something different, something that gave the place depth. I know you were concerned when you got here about what the heck is going on with Lorelei's Muse. I'm going to be making a few little changes here and there... so I didn't want to change things too much on you.

I'm seeing a number of you placing posts up about your plans for next year. We all want to succeed in the new year and get these projects we've started done and put out there.

I definitely have way too many projects on my hands and wonder if I'll get some of them finished.
I'm writing a mystery, right now, which is quite different from what I've been doing up to now. Well, it's a mystery with a little paranormal activity happening, but I definitely wanted something that would appeal to people who don't like vampires, or other fantasy elements. Although a ghost might fit in with some people's range of beliefs.

So, I've got that. I'm also working on my self-published book Spell of the Black Unicorn. I'm still in two minds as to what to do with it. Since it's in a book format right now, I've wanted to put it in an ebook format and have control over it. But I'm not sure if I've got the time and energy to place it on Smashwords. But I would like to. But before I do I'm going through it, and with help of my beta reader, Shelly Arkon (hi, Shelly!), I'll eventually get this thing into shape for whatever I decide to do with it.

I've begun a horror piece which I want to work on some more. It won't be more than a novella. That I want to approach a publisher with, but I'm not saying who as yet.

I wish to give thanks to all of you who have stopped by and made comments over the past year.

And a special thank you to the following people who have featured me, my book, and/or a review of my books this year: YOUR AWARD IS BELOW!!

~ To Shelly Arkon who had some fabulous things to say about my first vampire book, Vampire Ascending, and had hosted me a couple of times--you are a fantastic friend, and I think our friendship will last a life-time. She also was one of the winners of Vampire's Trill on one of the blogs that featured my book's debut.

~ To Dora Dee who has been spending an inordinate amount of time on her Blackberry tweeting about my book and she had the first review of Vampire's Trill. She's one heck of a friend to have in my corner and because of her hard work, she has won a hard copy of Vampire's Trill.

~ To Heather McCorkle, who has been my blogging friend from the beginning. I've watched as she worked hard to get her very first book out there. She's a very supportive friend and she has been a wonderful person to get to know.

I've been given a special award, today, and want to pass it along to these three women specifically because they've been constant friends for a while. I want to thank Christine Rains for giving me this award. It's a pleasure to know her, and many of you out there! I'm supposed to give it to twenty people, but time is taking its toll here and I simply am out of time.

For now Heather, Shelly and Dora Dee you may take your award for Great Comments on my posts. 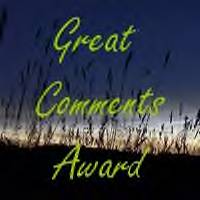 Thank you everyone and hope to see you all in the new year and meet a few new ones as well ! !
~Lorelei
at December 30, 2011