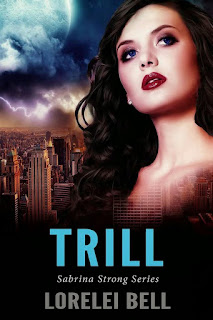 Nicholas looked about thirty, in human years, and he wore his straight black hair pulled off his heart-shaped face. He was equal parts of Hungarian and Romanian descent and could swear eloquently in either language. His turning was about the time when the bubonic plague was poised to infect all of Europe.

I'd always admired Nicolas' impeccable taste in dress. Tonight was no different. He wore a light-as-air blue shirt, a matching shiny-blue tie that had slanted stripes offset by dark, thin lines, and black slacks. No jacket. I'd almost forgotten how broad-shouldered he was, and I had to avert my gaze from him. His unique scent, of spicy-cloves and wood smoke, circulated in the currents of the air ducts, almost as if purposely drawing me in, seducing me. His vulpine face and hawkish nose were not his only distinguishing features. He also had deep brown eyes, nearly black. I knew that low light was commonplace throughout this level, but in here, it was nearly as dark as a theater.

“Well, I'm here,” I said, gesturing with my hands. “You wished to see me, master?” I added flippantly.

His lips quirked as he descended the steps toward me in a vampire-smooth move that required no contact with the floor, he just floated, while rubbing his hands together, as though trying to generate heat into them. He now looked villainous. I was sure this one small habitual movement meant he was relishing our meeting, as always, which I thought was odd since I hadn't seen him since the night he came to my backyard and I'd shot at him with Toby's sling-shot, but missed. He'd taken offense at that, and, to make this as uncomfortable as hell, I hadn't apologized, nor was I about to.

“Careful, dulceaţă, your humble devotion to my dominion over you merely excites me, and you know what happens when I get excited.” His warning should have been enough, but I felt bold and bitchy. Time of the month, indeed. I seemed to have no control over what came out of my mouth tonight.

“I would think my blood changing so drastically would make me utterly repugnant to you,” I threw in sarcastically, holding my handbag by the strap, both hands in front of me. I realized my knees were practically knocking. Shit. I knew he could sense my nervousness. It probably turned him on big-time. Vampires get off on fear in humans.

“On the contrary,” he said in his cool-as-ice-water voice. “I still want to fuck your brains out.” Nice. His Medieval eloquence and refinement flew out the window at this point. I was walking a knife's edge with him. It was time to change both my tactics and the subject. I clearly needed tactics when it came to Nicolas. I had allowed him to seduce me in my own bedroom, early on in our—um—professional relationship. Fortunately, he'd had the ability to stop before it was too late. However, I hadn't known at the time that he had already tasted me. That's what had pissed me off the most. He knew he'd bitten me while taking the werewolf venom, but never told me. I'd found out later. I was vulnerable to him then, and still was. He knew my emotions at a distance, and he could easily put a thrall on me. Good thing I came prepared.

I grimaced and blundered ahead anyway. “Is that why you came to my room that night, before you went to England?” I accused boldly, thinking to get this out in the open was a healthy way to keep our relationship strained. God, am I nuts, or what?

“Yes. I wanted to see you. I would have too, except your shifter intruded, and I had to leave—abruptly.”

“He's not my shifter!” I said heatedly, gripping my other arm with my free hand. “And don't think I don't know that you blanked my mind, so you didn't leave that abruptly. Makes me wonder why you took the chance in coming over to the human side when you don't have a pass to get in. Did you really think no one would figure out you'd been there?”

“It matters not.” His smirk seemed overly smug. “Do you realize how simple it would be to seduce you, now?” his silky voice cascading over me was like an inviting waterfall. I could feel that he was suppressing his thrall, just enough. He didn't need eye contact with me because he'd bitten me; a blood bond is much stronger.

To counteract, I pulled out my crucifix from inside my shirt. It gleamed in the limited red light. He blinked and glanced away. It wasn't as satisfying as I had hoped it would be. What I wanted was a full cowering with hisses, but I could cling to the knowledge I had at least some power to counter-act his thrall.

“But I won't. Now, put that silly thing away, please. We have important things to discuss. I will not continue until you cease your ridiculous attempt to thwart me.” His voice sounded angry and had a savage edge to it. It was prudent not to push him. I reminded myself that, technically, he was now my boss, and his power over me was the scariest part. I put the crucifix back under my shirt, knowing I could pull it out at a moment's notice. If he didn't stop me, that is.