The Best Review Ever!

Most of us writers--well, maybe all of us--need stroking, a little kindness of words, someone other than another writer, friend, or relative to say something about our book(s) to give our works their due.

I finally got number 14 review over night and believe me, she says everything I've been saying all along about my books


Sabrina Strong series
is NOT a
Cookie Cutter Vampire Romance!

here is the review:
"The story unfolds with a woman who is a 'touch' clairvoyant & who's past had opened her eyes to 'supernaturals' in the world. Starting with Vampires - and the world they inhabit - and control, down to the revelation of her role within the supernatural. From a woman struggling with her own relationship issues - to being wanted suddenly by many! I thought this would be just another vamp love story - but I was SO WRONG! This is an amazing series - as I finished this book, I went on line and bought the other 3... immediately! The writing is so strong I can almost 'be' her - and it moves so quickly - yet I have no problem in keeping all the characters in order! This may just well be my fav series for the year!!!"

See it here
for anyone who has not read the books, this is the best review so far to come in.

And by the way, there's a fifth book out, which Shirl B must not have seen. It is Crescendo 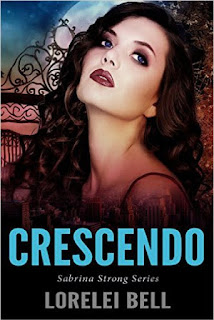 Bill Gannon is dead. The good news is the dhampire will be born, but not through who you'd expect. When Vasyl learns what Sabrina has done, it creates a rift between them. After donating her plasma in order to save Tremayne, and surviving Nicolas' attempt on her life, a group of black witches abduct her and begin draining her of her powers. She's near death when Dante stops them, and he and Vasyl return her home. Dante has a way to return her powers, but in a way that Vasyl isn't pleased with. After introducing Vasyl to her brother, wife and children, she warns him about vampires who will try and hurt them. But these warnings go unheeded when they get invitation for what they think is an all expenses paid weekend in Tremayne Towers. With the vampire war raging all around them, the ultimate confontation with Ilona Tremayne is at hand.